Bangkok is not a good city holiday destination for families, and you shouldn’t stay there waiting for a connection for a couple of days. If you want to explore Bangkok, you should spend at least five days there, as the city is vast and there is not much to see there in one day.

The short days all year round, the humid heat and the absurdity of the streets combined with the huge crowds slow down the exploration of the city and make it very stressful at times. So a family heading to Bangkok should find out good places to visit for families , and otherwise learn about mobility and safety. 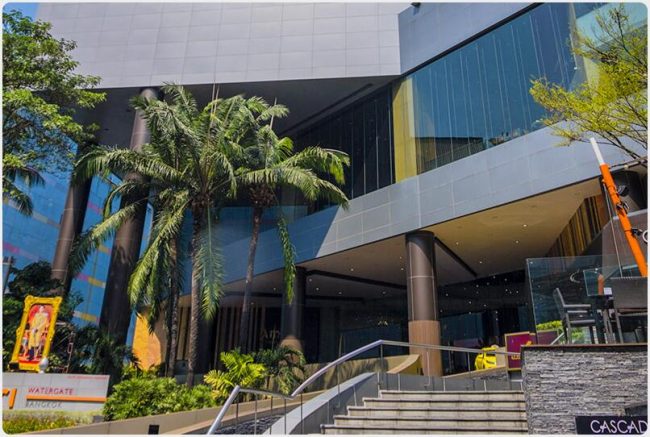 You should travel to Bangkok during the so-called dry and cool season, which starts in late November and ends in April. Admittedly, it’s never cool in Bangkok, but temperatures below 20 degrees are extremely rare there. Even in the coldest hours, it is 28-35 degrees during the day and 24-28 degrees at night. The humidity is high and this way the evenings can feel hotter than the days.

The best times to travel to Bangkok with children under school age are around mid-November to Christmas and from mid-January to early March. Bangkok is a big city, so vacation times there may not be very much busier than other times. It is also an international city with a lot of travelers, such as Koreans and Chinese, who have their own vacation times.

The best times to travel to Bangkok with school-age children or young people are Christmas and winter holidays, although between Christmas and Epiphany, accommodation should be booked well in advance. If you are going on a package tour, the weeks around Christmas break, from around mid-December to around mid-January, are the most expensive. Even self-employed travelers have to pay more than normal for their tickets at this time, but those who buy their tickets three to four months in advance can get them at the normal price.

After the first week of March and by the end of March at the latest, daytime temperatures always rise above 35 degrees and in April the city is at its hottest. The expected rainy season begins during May, and while there may not be rain every day, the period from May to mid-November is a humid time when it can rain very heavily at times.

If you want to travel to Bangkok in the summer, June is the least rainy month and July is the second driest. May, September and October are very rainy months when Bangkok is worth avoiding.

Bangkok is not a good place to visit for families with asthma or other respiratory ailments. In recent years, there has been dangerous pollution in December, January and February, as well as other dry months. If you are in Bangkok when you are being warned about pollution, shopping malls are good places to stay and the subway and BTS are the best means of transportation. 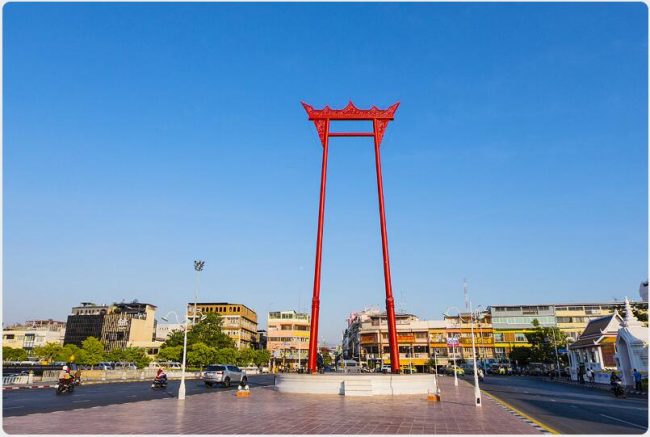 Bangkok offers all kinds of dishes. The cheapest and perhaps best dishes are Thai dishes, among which there are many dishes to the liking of children and young people. Pad Thai, seafood noodles (fried noodles with Seafood) and seafood noodles (rice or fried rice with Seafood) are always good and safe. Meat dishes are risky because they have been poorly preserved. Western food is expensive and not as good as in Europe, and there is no point in visiting international fast food places here. The food courts in the malls can be good, but they are very lively at least at lunchtime. Indian restaurants are also good for families, and there are especially many of them close to Sam Yot Metro Station, the so-called In Little India [ on the map ].

Learn more about the best dining areas and dishes in Bangkok.

Bangkok is a shopping paradise, and it’s worth going there with your suitcase almost empty. The prices are good and the amount on offer is staggering, but shopping takes time and payment cards do not go anywhere. That way, it’s good to have plenty of time and local cash with you going shopping.

You can buy anything in Bangkok, and you can find exotic Southeast Asian and Chinese as well as Western products.

Exotic products are nice to watch in Chinatown, a Chinese district that is quite a busy place. There are wonderful products and foods and they are worth seeing.

Another area with lots of shopping malls is Siam Square, which is quite a short distance away. Its shopping malls are luxury locations and include Siam Discovery, Siam Paragon and CentralWorld, within walking distance of Platinum Plaza. Siam Square can be reached by BTS train (station: Siam).

There are also many shopping malls near Sam Yot Metro Station, and children and young people are particularly interested in the Mega Plaza, which has games, computers, cameras and more.

The surroundings of Khao San Road are quite peaceful during the day and are surrounded by many shopping streets with typical gifts and all sorts of crisp. The same applies to the river bank, where the so-called. There are many shops selling attractive products near the Amuletti Market, but some of them sell low-quality goods. 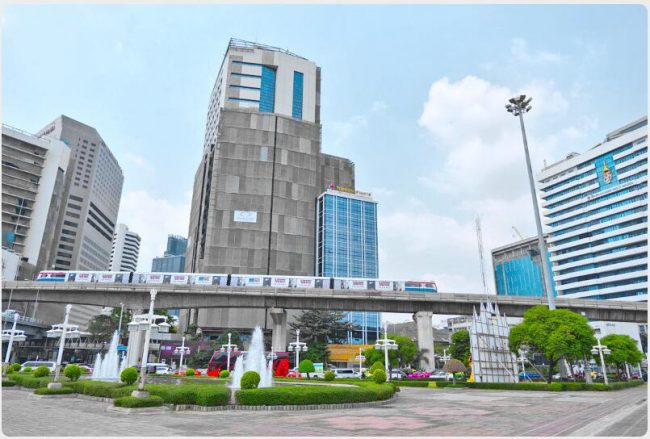 Moving from place to place

Getting around is harder in Bangkok than in the major metropolises of Europe. It is relatively inexpensive to take a taxi there, but the congestion is huge and car travel can take time. Tuk-tuk rides are overpriced and aimed at tourists, and tuk-tuk has to suffer from traffic pollution. The best means of transport are the ever-expanding metro and the BTS, an air train with interesting scenery. Airport Rail Link is also a good way to get from one place to another in some respects, and for those whose accommodation is along its route, it is a very convenient ride.

The metro is air-conditioned but usually very lively, valuables should be carefully cared for, and when leaving the stations it is important to look at the right exit route, as the one choosing the wrong route will have to go back. For travel, a token is purchased that is held during the trip and sucked in by the exit gate. Different trips have different prices, and it’s important to buy a ticket that goes far enough, otherwise you won’t be able to get out of the gate.

The BTS Skytrain is a nice way to navigate some routes, and it has a similar token system. Discounts are available for those under 120 cents long, and those under 90 cents long travel for free. However, children of this size must be dealt with at the box office before the trip.

A taxi is a good means of transport for families, but you should be prepared for congestion. They are almost constant, but most in the morning and early evening until around 9 p.m. A taxi that refuses to turn on the meter should not be taken. There are taxi services in the city, especially in connection with hotels, but the price of the trip is agreed in advance and they are overpriced, although they are ridiculous compared to Finnish taxis.

Families should not board canal boats, except for those with athletic teens. Getting in and out of canal boats is a dubious endeavor, the footwear must be good and it is worth sitting so that the water does not get splashed in the mouth under any circumstances.

Ships and boats moving on the river are notable rides, but they are also the best with Teens. They always have an indestructible number of passengers, and finding a seat is tricky.

It pays to read more about getting around Bangkok in the Small Travel Guide.

The best areas for families

The rather large area (Ko Ratanakosin), dominated by major attractions, and the nearby Banglamphu are good places for families to walk during the day. However, the distances are long and the midday sun in particular numbs quickly. At least Khao San Road and the adjacent Soi Rambuttr, as well as the nearby streets, can be toured in Banglamp during the day, but after about 5pm they turn into violent K-18 roads, which also have a huge amount of people and noise from around 8pm.

The Chinese district is a lively but interesting place. It’s not worth going there on Mondays, when a lot of places are closed, and it’s best to head there in the mornings.

The adjoining area with shopping malls and Little India is also pretty good terrain for families. This area next to Sam Yot Metro Station is also known for its parks, and the large swing [ on the map ] between it and Banglamphu is good to see.

The rectangular area between the corner of Siam Square and Pratunam is perhaps the best place for families. In the air-conditioned malls you can not only watch your shopping but also eat and sit down for a drink or ice cream. They have everything of interest to children and young people, and you can visit CentralWorld alone for half a day.

In Bangkok, the location of the accommodation should be chosen according to how long you stay there.

If you’re only in Bangkok for a couple of three days, you might want to stay along the Airport Rail Link and no more than a couple of hundred meters from one of its stations.

If you want to visit a lot of shopping malls, Pratunam, which is along the Airport Rail Link route, is perhaps a good area. However, it is not advisable to book accommodation from the market of the actual Pratunam, which has hotels in its infancy, as it is often nightmarishly lively.

Khao San Road junction is the worst nightmare of a place to spend the night, but if you choose a hotel or inn that is Khao San Road less than half a mile away, a place to stay can be quite a good area.

Sukhumvit is known for the large number of large and fine hotels. If you want to relax instead of cycling in Bangkok, a hotel with a swimming pool and other delicacies may be the best solution. They are available elsewhere in the city, but Sukhumvit is well connected to the rest, especially if you stay near a BTS station or subway station.

Recently, such a direction of tourism as ecotourism has been developing in Armenia. In the nature protection zones of the state, various […]

The creation of an independent Libyan state came only six years after the end of the war, as the conclusion of a […]