Constitution, form of government and separation of powers

This was suspended on April 11, 2019 with the overthrow of the state president.

According to its constitution, Sudan actually had a federal structure, but largely showed the features of a central state. This was particularly evident from the lack of financial resources in the federal states and the lower local administrative units, which hardly had their own sources of income and were therefore dependent on grants from the central government.

The President was endowed with a great deal of power. In addition to the office of head of state, he was also head of government, high commander of the army and the police and chairman of the judges’ council. Until April 11, 2019, the head of state was Omar Hassan Ahmed al-Bashir, who first came to power in a military coup in 1989.

After the independence of South Sudan, a new constitution should be drawn up for Sudan. The new version has been postponed again and again, but according to plans it should be strongly Islamic. The constitutional text has already been drafted by the ruling party. Since other parties were not consulted here, the opposition parties refused to cooperate in 2012.

At the beginning of 2015, plans were announced to make extensive constitutional changes, which should above all strengthen the powers of the president. The plans, which were heavily criticized by the opposition and ratified at the end of 2016, include the appointment of provincial governors by the president, who were directly elected by the population for the first time since the regional elections in 2010, and an upgrading of the National Security Service (NIS). In August 2019, the Transitional Military Council (TMC) and the FFC adopted a long-awaited transitional constitution.

The parliament consisted of two chambers until it was dissolved by the military council. The members of the National Assembly (Al-Majlis al-Watani), like the President, were directly elected. After the 2010 elections, the National Assembly consisted of 450 MPs. After the referendum on the secession of South Sudan, the South Sudanese MPs were ousted by a presidential decree before the independence of the South.

Following the administrative restructuring of Darfur at the beginning of 2012, which was recommended during the peace efforts in the negotiations in Doha, and the restoration of West Kordofan at the beginning of 2013, Sudan currently consists of 18 federal states. They each sent two representatives to the also dissolved State Council (Al-Majlis al Welayat). In addition, the Abyei Region, which has a special status, sent two observers without voting rights.

The parliaments of the federal states, however, had virtually no say in the matter, which is particularly evident from the fact that they only had small budgets.

While most of the new banknotes are very similar to the older versions, the color scheme has been changed and particular emphasis has been placed on removing associations with South Sudan. For example, the 10 pound note was redesigned because it featured a longhorn cattle, which is seen as a symbol for the southern Sudanese Western Bahr el Ghazal region. The 1 pound note was replaced by a coin.

The sandstone plateau, which extends over 150 km and drops steeply up to 600 m, is one of the most impressive geological […] 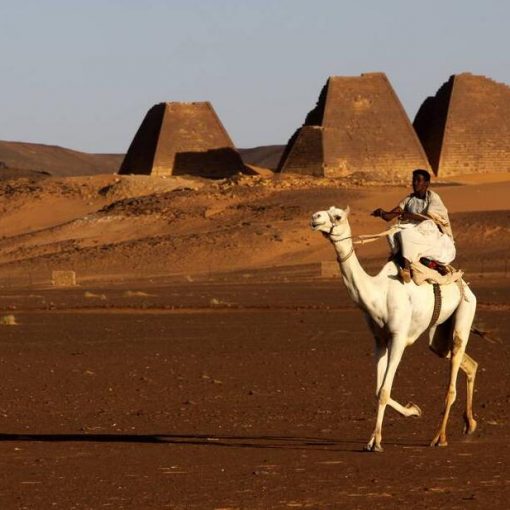 United States Before al-Bashir came to power in 1989 and followed Islamist policies, Sudan was the largest recipient of US development and […]