For almost 30 years, under former President Omar al-Bashir, the media – press, radio, and television were controlled by the state. If they did not belong to the ruling party or were state-owned, they were subject to censorship. The publication of articles was regularly banned or entire newspaper editions were confiscated. In 2014 this affected 50 editions, with a renewed wave of censorship in February 2015, the Sudanese security authorities outdid themselves when they confiscated 19 newspaper editions within just three days. This continued in the following years. The last time it hit the Al-Tayyar newspaper was in September 2017, apparently because of the pressure of an interview with the leader of the SPLM-N and again in late November 2017. This also affected the El Jareeda newspaper at regular intervals.

Both the bans on newspaper circulation, which made the economic survival of newspaper publishers much more difficult, and the complete shutdowns of newspapers, left many journalists unemployed. In July 2015, this also hit the weekly Elaph. Pressure was also exerted on newspaper publishers to control the content of the news or to impose professional bans on journalists. In the event of unwanted reportingState authorities have also reacted to foreign media in the past by closing their offices. According to reports from Reporters Without Borders, the numerous taboo topics include, for example, reporting on military actions in the unrest provinces of the country, reports on supply shortages, the effects of subsidy cuts and the above-mentioned allegations of corruption against public officials.

Internet users have limited access to critical websites operating abroad. Unwanted websites have long been blocked by security authorities. In 2014, Reporters Without Borders accepted Sudan as one of the “Enemies of the Internet”.In its ranking of press freedom in 2020, Reporters Without Borders ranks Sudan, up 16 places over the previous year, and currently ranks 159 out of 180 countries examined. After Sudan was only at the bottom of the African list ahead of Eritrea for a long time, after the fall of al-Bashir a little hope is growing in the media landscape. With the US organization Freedom House, Sudan’s press will continue to receive the “not free” status in 2020.

According to mathgeneral, the state news agency is the Sudan News Agency (SUNA). Television is offered by the state-owned Sudan Television, DSTv (pay TV from South Africa), Ashorooq (via satellite from Dubai), Omdurman TV and Blue Nile TV. If you can afford it and get government permission, you can watch satellite TV.

The most important radio stations are the state-run Sudan National Broadcasting Corp., Radio Omdurman and the opposition Radio Dabanga, which operates from the Netherlands and serves Darfur via shortwave. In addition to Arabic, Radio Dabanga broadcasts in various local languages.

On air in the crisis area of Darfur: Radio Dabanga

The main newspapers in the country are:

Fixed network connections are not very common in Sudan and are mainly concentrated in Khartoum, and not all cities are connected to the fixed network by a long way. There are fewer than half a million landline connections across the country and the landline market is currently only showing low growth rates after a slump. The only two providers are Thabit, the fixed network division of 2002 partially privatized Sudatel and since 2006 Canartel (principal owner since the summer of 2016, the Bank of Khartoum, which made hand as the then junior partner of its right of first refusal and prevented a sale of the Zain Group of Kuwait).

Public calls in the cities can be made from SUDATEL’s green telephone booths or from many small private telephone shops.

Even for a shorter stay, it is advisable to buy a Sudanese SIM card (available for around three Sudanese pounds) and to top it up accordingly, as the roaming charges in Sudan are comparatively high.

Internet use in Sudan is on the rise. It is estimated for 2020 that around 30% of the population will have private internet access, which is a high value in regional comparison.

As a result of the mostly missing landline connections, around 95% of the use is concentrated in Khartoum and is otherwise due to the heavy use of mobile internet. Compared with the other Arab countries, Sudan has by far the highest proportion of mobile Internet use compared to landline use. The main providers are Canartel, Sudani, MTN and Zain. Outside of Khartoum, internet cafes can only be found in the other larger cities. The connection speed varies greatly, making downloads sometimes a ordeal and internet telephony often comparable to a radio experience.

During the unrest in Khartoum in September 2013, the government allegedly temporarily cut the Internet completely across the country, presumably to disrupt communication during the demonstrations. Social media were also blocked during the protests from December 2018 that led to the overthrow of al-Bashir. The transitional government is also happy to use the possibility of blocking the Internet in connection with protests. In addition, the US sanctions make Internet use more difficult. Internet sites that the government believes could jeopardize public morality are filtered and Internet cafes are inspected.

After the Sudanese postal system used to be characterized by serious unreliability such as missing international mail or deliveries with weeks of delay, these conditions have improved considerably in recent years. Shipments to Europe now only take a week. Shipments to Sudan can be sent to the main post office in Khartoum without any problems and without additional charges. This requires the details of the recipient and the addition “c / o Poste Restante, Main Post Office, Khartoum, Sudan”. 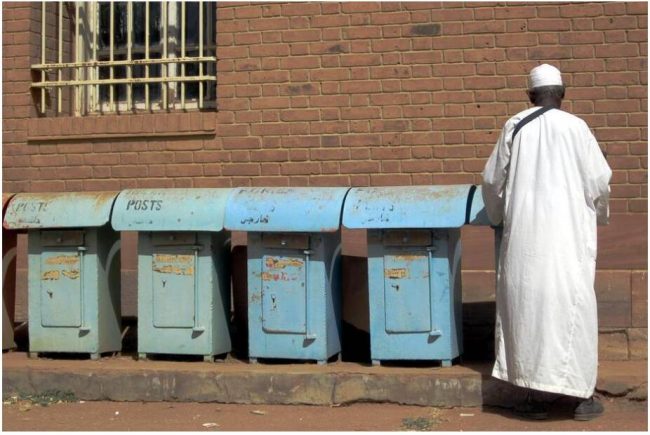