Genuine inspiration was generally very low. We were deluded into making poetry by introducing into literature something that could be considered, according to the concepts of the time, as a new genre, or by restoring or variously grafting the ancient genres. The aesthetic canons, which were in vogue as a result of contemporary philology, favored this forced production. Elements were sought in all fields, both in popular culture, in provincial customs, in short stories, in folklore, and in the highest regions of doctrine and science. Callimachus himself gave an example of such a variety of tones, because in addition to the Aitia, the Ecale, the Hymns, he composed precisely the Giambi, in which, while deliberately excluding any coarseness, he showed that he wanted to make room for the vulgar and popular current. Consequently, we find in Alexandrian literature mirrored, together with all the intermediate nuances, the two opposite tendencies of learned poetry and popular poetry. On the one hand, the lowest and most trivial forms are presented to us; which remain low and trivial, even if they are usually composed with an artistic purpose and elaborated with the paints of style, metrics, etc. They are represented not only by Herodas, but by a group of authors who called themselves cinedologists or itarodes, among whom Sotade di Maronea was particularly renowned. On the other hand, we have the most elaborate, the most abstruse, the most erudition-laden forms: in which the rarity or difficulty of the content is combined with the refinement of the means of expression, based on the exaggeration of the archaic classical style. Main samples for this respect are Lycophron of Chalcis (flowered around 270) and Euphorion, also of Chalcis (a few decades later): the first left us a kind of mythological prophetic poem, with political substratum, the Alessandra ; and the second wrote especially elegies and epilli, taking the learned manner of Callimachus to its extreme consequences and making himself famous for the weight of his mythology.

Mythological scholarship was not the only one that attracted the attention of poets. Every science, physics, astronomy, mathematics, geography, grammar, was considered suitable to be put into verse. Naturally in this way the poetic inspiration, which already lacked, was even more sacrificed: that is, the pure and simple versification was mistaken for poetry. The misunderstanding was favored by the fallacious and empirical conditions of contemporary aesthetics, represented by the concepts of the Peripatetics and especially then of the Stoics, who explicitly taught to mix useful dulci and to “season the truth in soft verses”. Therefore it seemed that poetry could be largely didactic and should be impregnated with those results and studies to which the spirit of

Disciples of Stoic philosophers were precisely the main samples of this so-called didactic poem, like Aratus and Eratosthenes.

Arato di Soli (lived in the first half of the III century) formed his education in Athens, together with Callimaco; then, instead of turning to the court of Alexandria, he was attracted to that of Macedonia by King Antigono Gonata, of which he became in a certain way the official poet. Following the intentions of this sovereign, who professed to be a pupil of the stoic Zeno, he, instead of singing deeds of princes or heroes, chose a scientific topic, which would return to praise and illustration of the universe and of God. major poem, of astronomical content, the Phenomena, where in a first part the characters and movements of the various constellations are described (not without introducing here and there, for the purpose of poetic delight and with allegorical value, the legends that refer to the sky), and in a second part the indications useful for predicting the weather are treated (Pronostici). Aratus was not an astronomer: he simply put into verse the prose work of the great astronomer Eudossus of Cnidus, a disciple of Plato. Not being animated by a deep interest or by an ardent impulse of passion for the things treated, he could not pour the breath of true poetry into these things. Its value consists in the formal perfection, in the technical elaboration of the language and of the verse, which responds to the most exquisite Hellenistic taste. Eratosthenes of Cyrene (about 275-05) also practiced on astronomical subjects, developing in some poems not preserved to us (Hermes, Erigone, etc.). concepts and legends about celestial phenomena, which he himself, with a philological-antiquarian understanding, had collected in another work, in prose, entitled Catasterisms (ie “Transformation into stars”). Eratosthenes was a true scholar of exact sciences, and he cultivated various disciplines: mathematics, astronomy, geography as well as grammar and literature. A very complex personality, he gave an example of an encyclopedic tendency, which was especially affirming itself in Alexandria, in the shadow of the Library and the Museum. In poetry, as well as in philology, he depended on Callimachus, and attached great value to the search for the mythological and etiological element. Alongside Arato and Eratosthenes, Nicandro di Colofone (more or less contemporary with them) should also be remembered. He was a doctor: his major poems, which were imitated by Roman poets, especially by Virgil and Ovid, in the Georgicsand Metamorphosis, they are lost; two poems remain Theriaca (on poisonous snakes) and Alexipharmaca (on offenders), which appear to us as arid treatises devoid of any poetic value.

The greatest and best flowering of Alexandrian poetry belongs to the century. III a. C. and rather at the beginning than at the end. Later, as we approach the Roman age, through the century. II and I a. C., it is increasingly losing all its own character, all virtues of development, all warmth of spiritual life, and ends up almost completely exhausted. The extenuation is mainly marked by the misunderstanding we have just spoken of, whereby poetry is confused with science, or rather it is reduced to simple versification, like an instrument of pleasure made to adorn the results of the doctrine with its external beauty..

Didactic poems are rife; and above all the mythological and etiological epilli continue to be cultivated, in the manner of Callimachus, Euphorion, Eratosthenes, etc.: indeed, in this address, we find in the first century. to. C. a distinguished representative, Partenio di Nicea, who exercised considerable and direct influence on the poetae novi Romans. If some vein of purer poetry manages to emerge here and there, it is expressed in theocritical imitation, that is, in the bucolic compositions that some followers of Theocritus, such as Bione and Mosco, had to produce not without a certain grace and spontaneity of feeling. Or it is expressed, quite frequently, in the short couplets of occasional epigrams, especially erotic epigrams, of which, at the beginning of the Alexandrian age, Asclepias of Samos, Posidippus and others had given very effective examples. Now, between the century. II and I a. C., we are presented with a very original figure of a love poet, Meleager of Gadara, a cynical philosopher, who, in a beautiful bunch of small compositions, portrays the movements of his fine and voluptuous soul with unsurpassed delicacy. In addition to Meleager there is it is also a host of minors and minima, many of whom from the Hellenistic East and Greece had to migrate to Italy as a result of the Roman conquests: Philodemus, also from Gadara, Epicurean philosopher, Antipater of Sidon, Antipater of Thessalonica, Tullio Laurea, Archia, Crinagora of Mytilene, etc. Their epigrams became part of special collections, which, through various successive phases, increasing the material of the Roman and Byzantine age, then led to the so-called Palatine anthology. Therefore, there is no lack of poetic manifestations: but in general they are weak and of little significance. 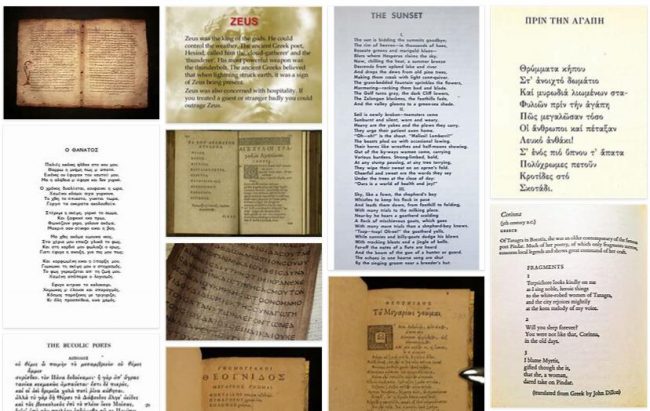 According to theinternetfaqs, Veere is a small town located on the former island of Walcheren. Nowadays Veere plays a modest role within […]

Reception of documents for obtaining short-term visas to France is carried out by the VFS Center. The center is located at: Moscow […]